On day 2 I got going pretty early, definitely feeling sore from the previous day’s long hike. The staff at Kutsurogi no Sato seemed dismayed that I was leaving so early, without having visited the onsen next door — I think we all realized it was a bit silly for me to have visited by myself and made so little use of the facility.

I returned to the main road and headed up toward the mountains. The footpath over Usui Pass begins soon after Route 56 splits off from Route 18. The map in the guidebook shows the footpath leaving the road just before a water treatment plant, and thus skipping the big bend in Route 18, but I couldn’t find the path and just stayed on the road. (Soon after, I saw where it is supposed to intersect with Route 18, and it looked to me like the path is no longer maintained here — you should just stick to the road.) The screenshot from Google Street View shows where the footpath starts – there is a shelter, a signboard, and a path marker.

The path starts pretty steep and is pretty well maintained. (The wooden steps in the picture below are useful but will need to be maintainedÂ in the next few years.) I was pretty excited to walk on a forest path after a day of walking on asphalt. I can only imagine how much more exciting it is if you’ve been walking through the Tokyo outskirts for three or four days. 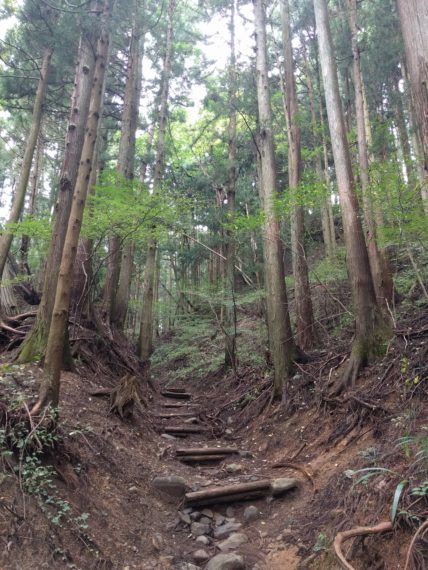 There are also some rocky stretches like the one below that could be a little treacherous in heavy rain, but contrary to how it might look in the picture the path is very clear in this section. ItÂ would be pretty impossible to get lost; there are basically no junctions. Still, to be safe it would be good to know the characters for Nakasendo (ä¸­å±±é“). 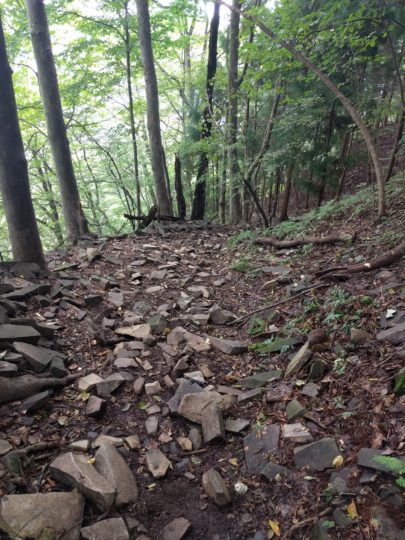 One of the payoffs in this early section is a clear view back toward Takasaki in which you can see the Nakasendo running through the valley (see below).Â This view is already quite overgrown compared to photos I’ve seen of it on other blogs — make sure to visit soon before it is overgrown completely! 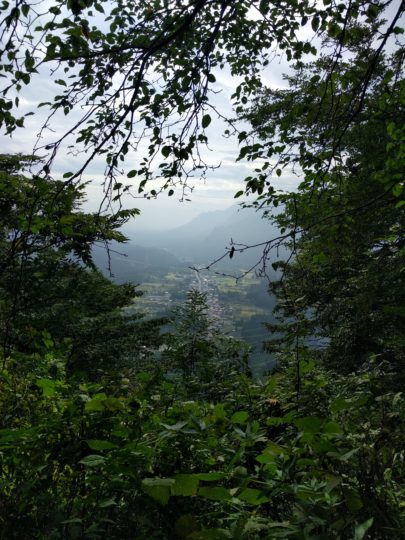 Along the way, there are many historical markers like the ones below. They describe historical events that took place along the path, religious statues, and the remains of tea rooms and other travelers’ accommodations that are still visible along the path. 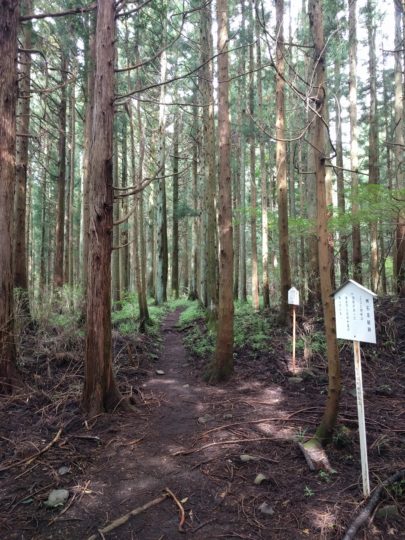 The marker below explains thatÂ there was a tea house here (actually four, if my reading is correct) and thatÂ a stone wall remains (visible in the back of the photo). Plus some graves! 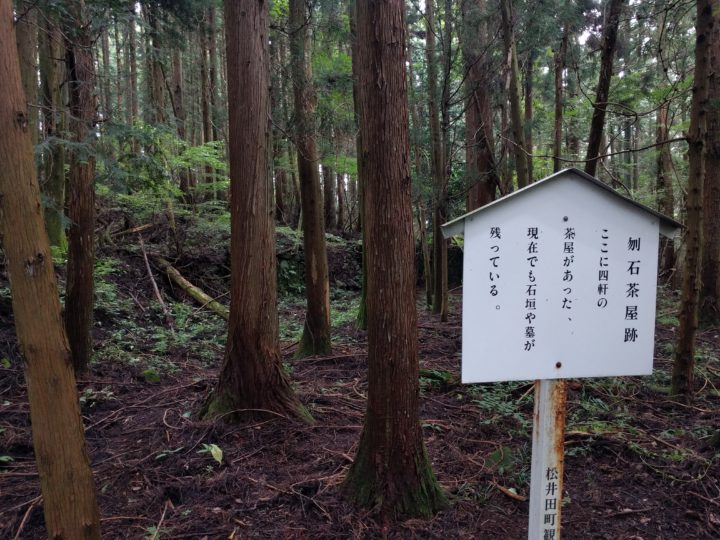 After the initial climb the path flattens out and follows a ridge through the forest. This was the nicest part of the whole trip for me. 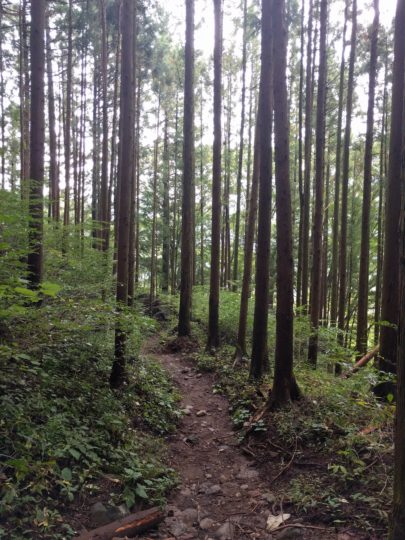 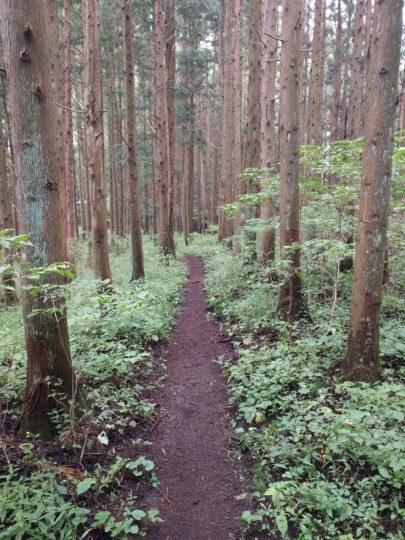 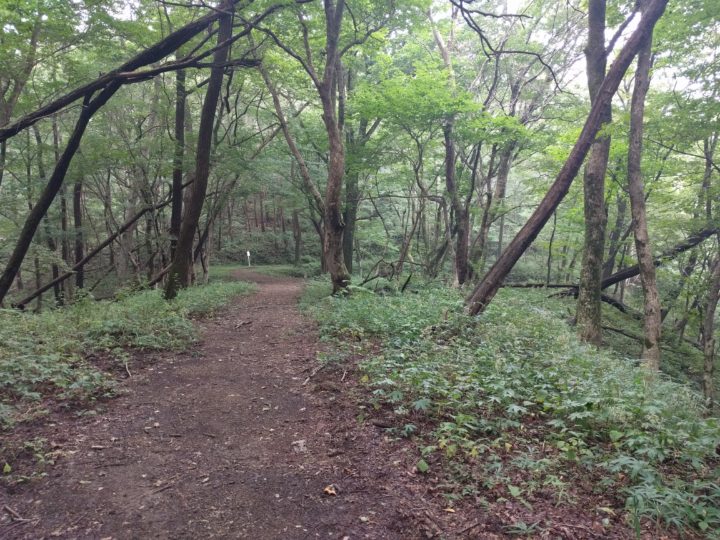 Watch out for erosion! Again some maintenance will be necessary. 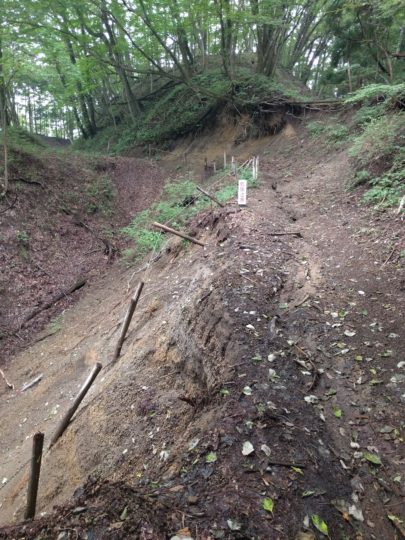 There is a stretch whereÂ the path is sunken and winding, as if in a bobsledÂ run. In this section I heardÂ rustling and movement in a stream bed below the path, which I thought might be bears. (I had seenÂ signs about bears, and I knew that some walkers carried bear bells.) Eventually I caught sight of some large animals that I later figured out were not bears but wild boars, or i no shishi. After my initial sighting from a very safe distance I later heardÂ some that were closer to the path; I got a pretty good glimpse (but not a good photo), then clapped my hands, which sent them darting away. At this point I was a little uneasy, as I was walking alone and I didn’t know anything about these animals. I was grateful that it wasn’t raining as I imagine it might get pretty muddy in these trough-paths. 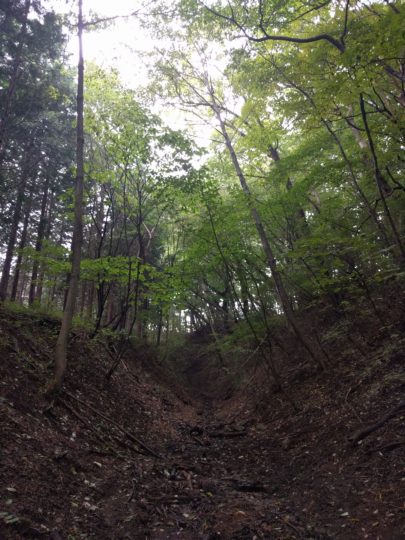 As it started to rain slightly, I came across the stream below. I decided to take off my shoes and socks to wade through. 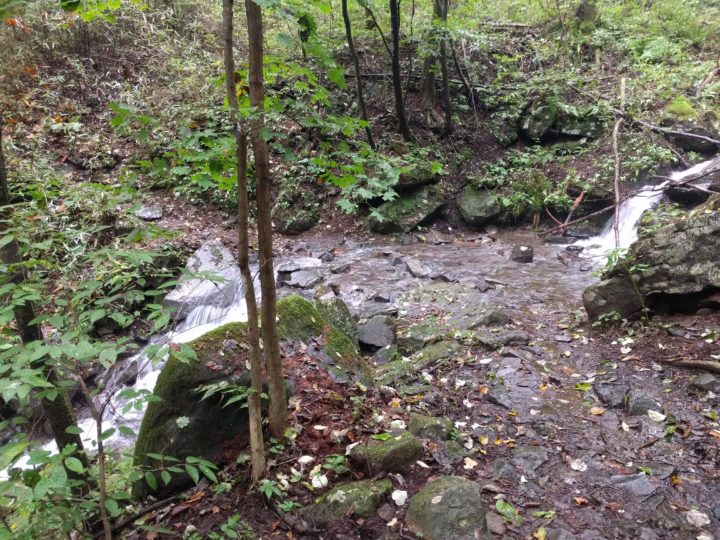 To my horror both ankles were bleeding! The bloodÂ had soaked through bothÂ socks, but I hadn’t noticed because they were covered by my pants. I had little cuts onÂ each ankle in almost precisely the same spot.Â I thought back toÂ some of the entries I had seen in theÂ guestbook at a shelter earlier in the day, which referred to leeches. Alas somewhere along the path I had been bitten by “mountain leeches” or yamabiru.Â Very impressive creatures! I would recommend protecting yourself against these in some way — perhaps by wearing boots that lace up above the ankles or wearing gaiters. 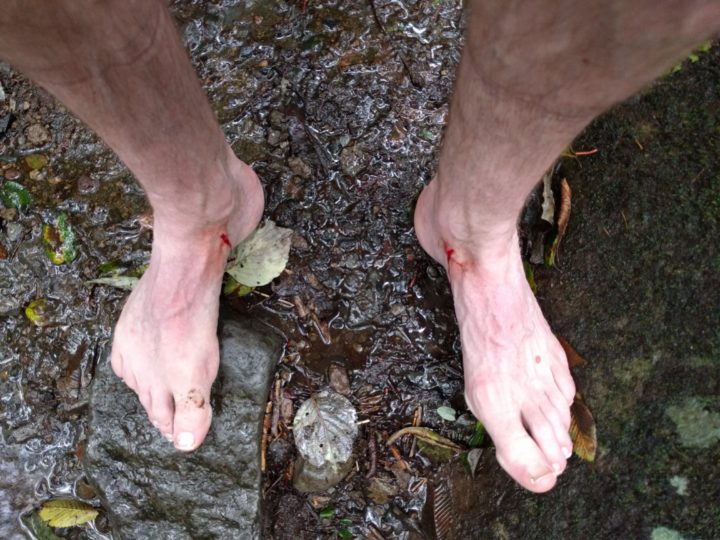 As I continued the path came to more closely resemble a mountain road, and I encountered some interestingÂ things left behind from when the road was actually used: an abandoned house (which I carefully entered), a road sign (I couldn’t figure out if it belonged here or was stashed here), and this beautifully rusted-out city bus: 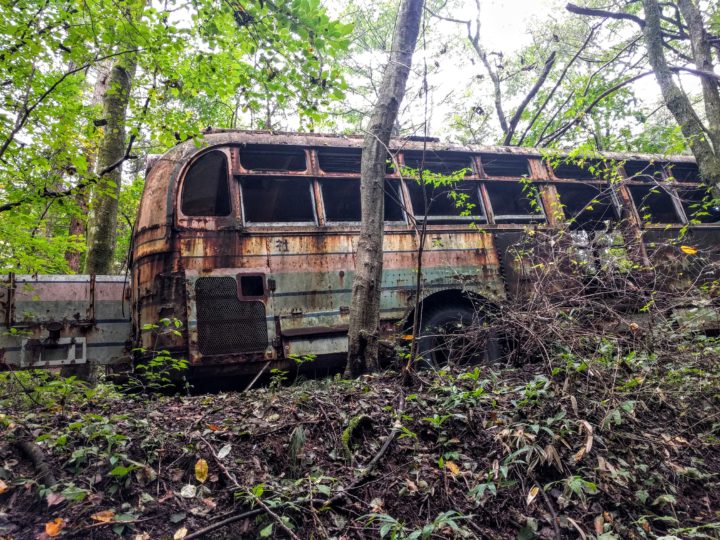 Along this part of the path there was an intersection that as far as I recall was the only possible point of uncertainty during this stage of the trip. (See below.) The path I had come from was behind me, and two options lay in front of me. The path on the left is the Nakasendo trail, heading for Karuizawa; the one on the right heads up the mountain (to a historic battle site, if I recall correctly). So if you’re coming from Tokyo, you want to go left here; if coming from Karuizawa just go straight. 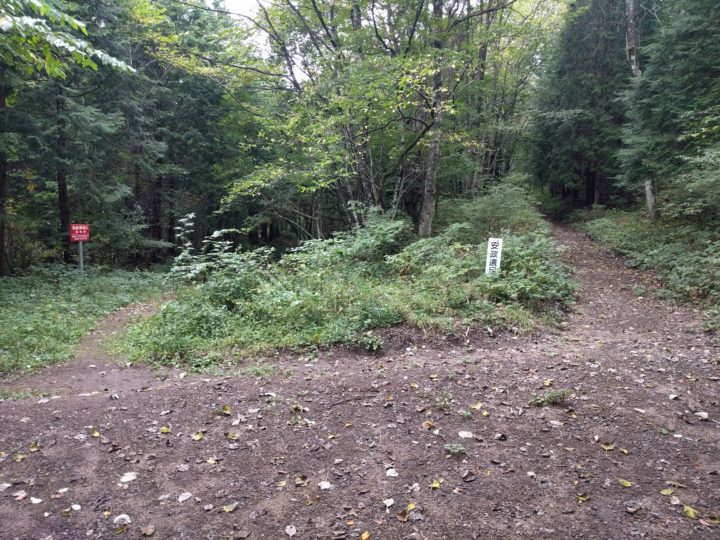 By this point in my journey it had started to rain more seriously. Just as I started to get soaked, the path turned into an asphalt road and I found myself in front of a shrine and a restaurant/gift shop. This collection of buildings is called Togemachi (literally, Pass Town) on Google Maps.Â I walked into the restaurant somewhat beleaguered and ordered some udon.

From here to the edge of Karuizawa (Ginza Dori) the Nakasendo path is apparently fairly difficult to follow. I was told by a guy working at another restaurant/gift shop in the same area that this was actually the hardest part to follow on the whole Nakasendo. He advised that I take the road (Route 123 on the map) instead. I set off to do that with my flimsy umbrella as the rain poured down. Eventually I was overtaken by a guy in a car who offered me a ride. I gratefully accepted. It took me a minute before I realized it was the same guy I had talked to about the path to Karuizawa; he had changed out of his work uniform so I didn’t recognize him at first. He dropped me off at Ginza Dori, where touristy shops line theÂ route of the old Nakasendo. (See below.) This is a different scene from the towns along the Nakasendo from Takasaki to Yokokawa; Karuizawa is a tourist destination in its own right, not a run-down town whose only claim to significance is its status as a post town on a now-defunct trade route. 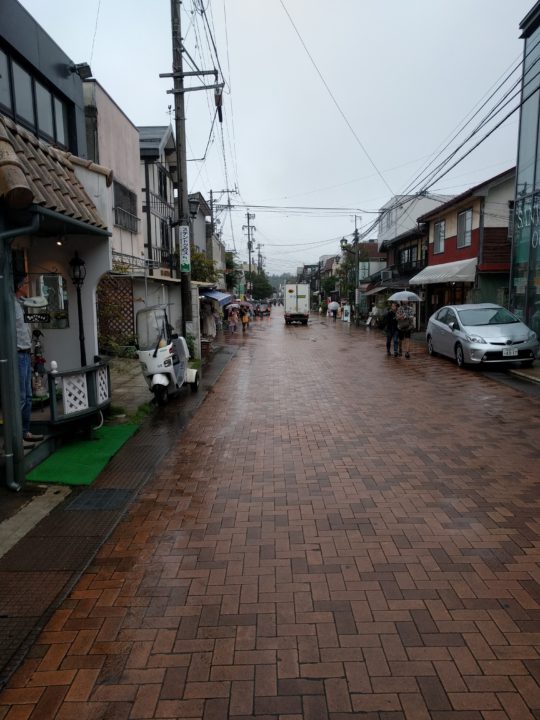 The more upscale feel intensified as I continuedÂ through Karuizawa, walking past expensive-looking private homes and resort hotels. My hotel for the night was on the other end of Karuizawa, in a ryokan called Yuusuge OnsenÂ Ryokan. I arrived late afternoon, had a bath in their very modest onsen, and ate a big dinner in their dining room. Room and dinner shown below. If you’re looking to do this trip, I would not recommend this accommodation either. I saw it compellingly and dismissively described on a Japanese website as “Showa-poi”, meaning that it had the feel of the Showa era, whichÂ lasted from the 1920s to the 1980s. That in itself should not dissuade you, but it smelled of cigarettes in the lobby; the onsen itself was meager; and the window screens in my room were unable to keep out two mosquitos that terrorized me throughout the night. (I know there were two because the harassment didn’t stop until I had killed both.) All this would be fine if it were cheap but it wasn’t. It’s possible that everywhere else in Karuizawa is astronomically expensive (as it appears to be a pretty posh resort town) but I think I could have done better. 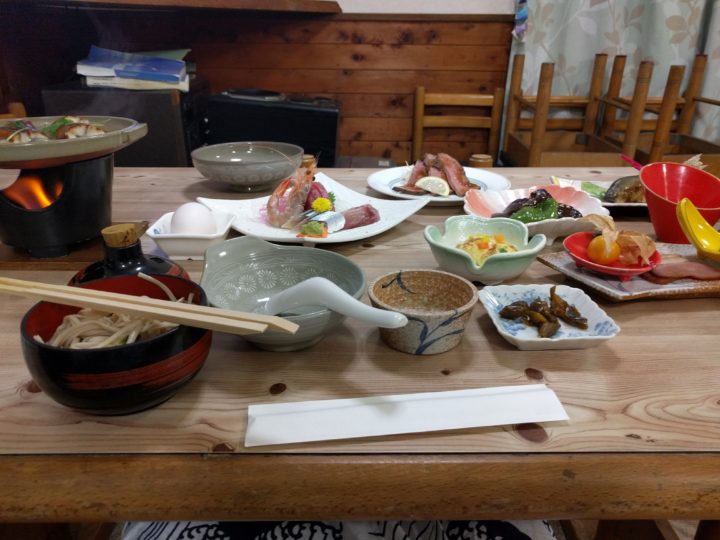 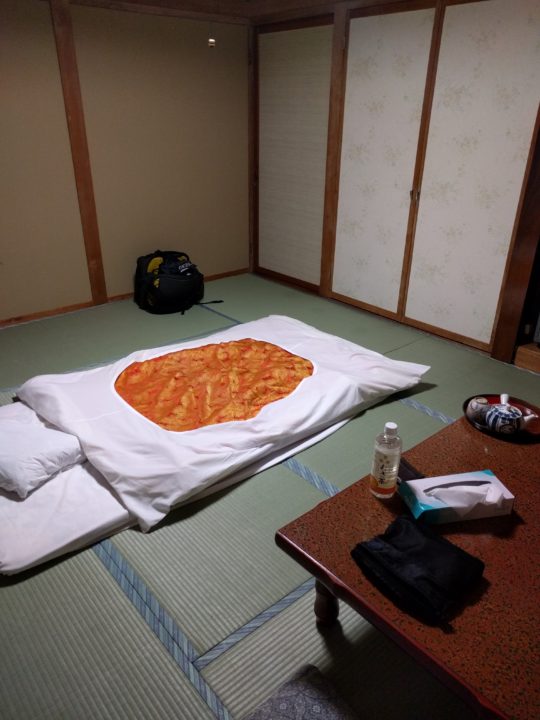